My Reservations toggle menu
Book now
Making sure you are safe with our flexible booking options and our increased hygiene precautions. DETAILS>

The Budapest Hotel, which most of Budapest knows as the Cylinder Hotel, has towered over Városmajor Park for almost half a century.

The hotel was built according to the designs of György Szrogh on the former site of the Bulgarian Garden using slipform construction and fair-faced concrete, the most cutting-edge technology of the time.

Its special design and location in the capital represented unique entertainment opportunities for young people desiring a relaxing venue. Comedian Géza Hofi and singer János Koós popularised the Joker Bar, now the London Room, with their consistently sold out shows.

Due to its growing fame, the Joker Bar eventually outgrew its space and moved to the larger capacity Panoráma Bar (now the Coca-Cola Bar) on the top floor. Péter Székely and his dance band entertained 200-250 people a night, an experience guests still remember 30 years later.

When the bar closed, it became a VIP Club with a sauna and roof terrace. However, because of safety concerns and a desire to make better use of the space, it was converted in 1994 into suites with the best panoramic view in Budapest.

The current Berlin Room used to be a coffee bar, and the present Madrid Room used to operate as the Miniature Restaurant. Only the Coffee Shop has preserved its original image. Over the years of course, minor renovations have been carried out. However, it is worth mentioning the

reconstruction in 1984-1985 when the hall was tiled with marble. The hotel was temporarily closed during these renovations.

The second major reconstruction occurred in 1997. The hotel was also closed during this time. The XIV and XV floors were renovated in 2006.

Currently, 280 rooms and 9 suites await guests. Four separate air-conditioned rooms with capacities ranging from 25 to 150 people are available for events and conferences

Many famous people have visited the Budapest Hotel’s r 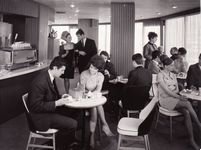 estaurant and coffee shop since it opened its doors in 1967.

Mária Szepes was a regular at the restaurant. Today, famous singers, actors and directors such as Levente Szörényi, Zsuzsa Koncz, János Bródy, Zorán, Dusán, Erzsi Galambos, Karola Csűrös and Károly Makk are all regulars at our restaurant and coffee shop.

A number of interesting and exciting things took place at the hotel over the last 50 years. The following example goes to prove that the hotel’s hospitality does not recognise the word “impossible” when its guests are concerned.

In 1993, when the hotel catered a medical conference off-site and had to prepare a number of special dishes, the hotel’s Robur minibus broke down. Then restaurant manager István Deák “risked life and limb” by stepping into heavy traffic and stopping a truck, doing whatever it took to get the food to the conference.

With its 43 hotels, the Danubius Hotels Group, based in Hungary, is one of Europe’s most significant hotel enterprises. The group’s characteristically high standard health and wellness resorts are located in Hungary, Great Britain, the Czech Republic, Slovakia and Romania.

One hotel selected! Up to 3 hotels can be compared

Two hotels selected! Up to 3 hotels can be compared