20th of August is always a very special celebration in Hungary. Think of it as huge summer closing party which has been extremely precious for the locals for thousands of years.  It’s one of our oldest national holidays, when we celebrate the foundation of our state, the state’s founder Saint Stephen, and the “festival of new bread”. It’s not only a national holiday, but also a state occasion, so numerous official events also take place on this day. The swearing-in of new military officers, water and air shows, ceremonial speeches and the spectacular firework show are all among the traditional programmes; but more recently, a number of other festivals have come to be associated with this red-letter day. 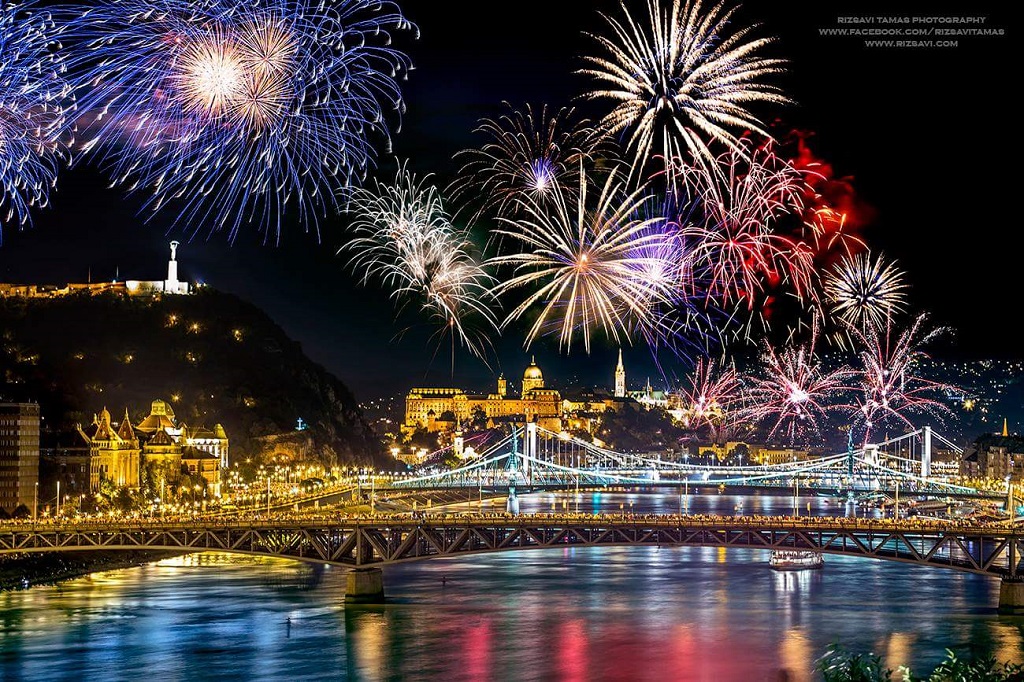 What do we celebrate on 20th August?

The 20th of August: Saint Stephen’s day, when we commemorate the foundation of the Christian Hungarian state more than a thousand years ago. During his reign, Stephen I declared 15th August the Day of Our Lady. It was on this day that he offered up the country to the Virgin Mary, and it was also on this day in 1038 that the king himself died. The date of the celebration was moved to August 20th by the king Saint Ladislaus, because on this day in 1083, with the blessing of Pope Gregory VII, the relics of Stephen I – the Holy Crown and the Holy Right Hand – were raised to the altar in the Basilica at Székesfehérvár, an act that was equivalent to canonisation.

From the reign of King Louis the Great onwards, 20th August continued to be observed as a religious festival. But later, when Pope Benedict XIV reduced the number of church celebrations in 1771, Saint Stephen’s day was left out of the liturgical calendar. Later, Maria Theresa ordered the reinstatement of Saint Stephen’s day, and even had it added to the calendars as a national holiday. After the crushing of the 1848 revolution, 20th August was not allowed to be held as a national celebration for a long time, as Saint Stephen was a symbol of the independent Hungarian state. After the 1867 Compromise, the day regained its former special status, and in 1891 it was declared a public holiday. It remained a national day until 1945, when it was abolished, although continued to be publicly celebrated as a religious festival until 1947. The communist regime did not officially recognise the religious and national associations of the occasion, so it was renamed the “festival of new bread”. Between 1949 and 1989 it was celebrated as Constitution Day. After 1989, the old traditions were revived, the procession of the Holy Right Hand was held again, and Saint Stephen’s Day became an official state celebration of the Republic of Hungary.

The official state celebrations start in Kossuth Square in the morning, culminating in a spectacular water and air show. The afternoon is given over to joyful family programmes and the ceremonial holy mass and procession at the Basilica, while the highlight of the evening (literally) is the fireworks display.

9:00 – 10.00 am Hungarian Military Air Parade over the Danube – Lower and upper quays in Pest and Buda

21:30 pm  „The game of fire and lights” – Fireworks and light parade over the Danube (in the lower and upper quays in Pest and Buda)

Although this year Saint Stephen’s day falls on a Saturday, we can celebrate Hungary’s birthday during 4 days between 18 and 21 August.

There are countless colourful and exciting family programmes, culinary and musical festival events to choose between. The festive programme series are held in various venues of the city and the participation is free of charge at every event (however some events may require previous registration).

Here are some of the main events you must visit during the festive days:

Held alongside the Saint Stephen’s Day celebrations of 20th August, the Street of Hungarian Flavours is sure to be one of the most popular gastronomic events of the year. This free food festival is where this year’s National Cake and the Saint Stephen’s Day bread will be presented, and countless culinary treats from every region of the country and the Carpathian Basin will be on show: fish soup from Baja, mutton stew from Karcag, a cornucopia of excellent handcrafted products, ginger-spiced sausage, a selection of pálinka (schnapps) varieties, Hungarian fish specialities, craft beers, traditional stuffed cabbage from Szatmár County. 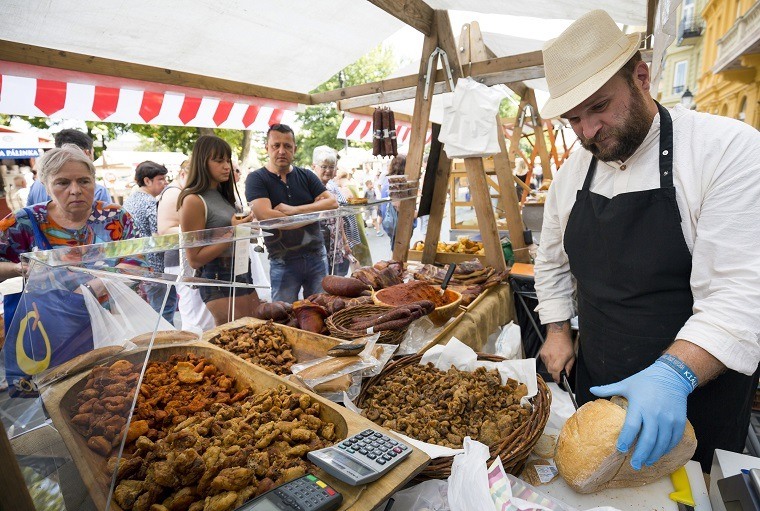 The event showcases the diverse gastronomic culture of the Carpathian Basin, exclusively from vendors who make their products from high-quality, local ingredients. A good many traditional small farmers and numerous traditional food producers will also be represented here, selling a variety of treats such as jams, fruit juices, craft beers, meat products and cheeses.

It is also here that the new National Cake of Hungary debuts every year! In 2022, the title was awarded to “Huncut szilva herceg” (Prince Naughty Plum), created by pastry chef Orsolya Karikó of the Vanília & Gelaro Handcraft Confectionary in Nagykőrös. 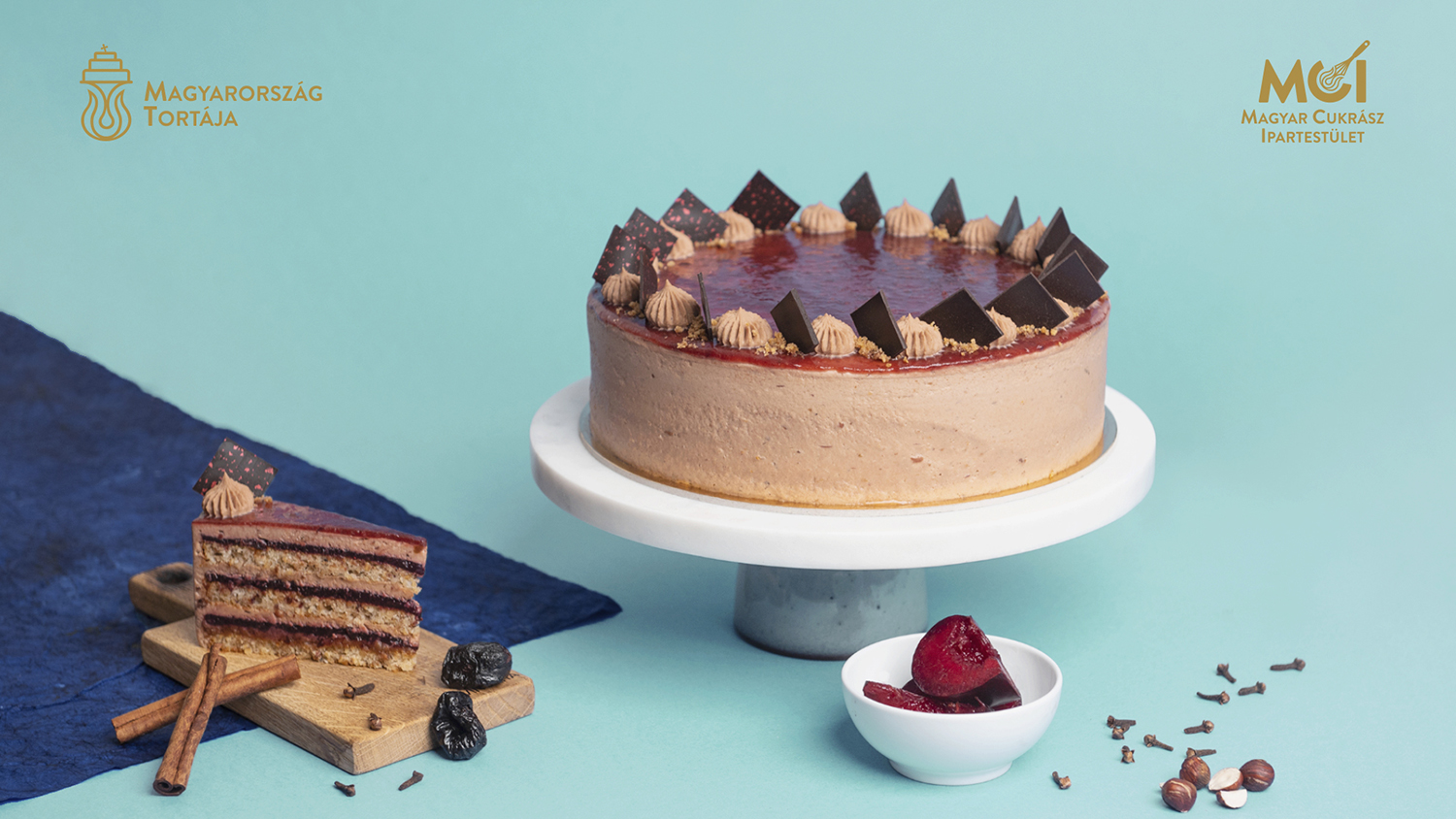 The main characters of the country’s cake are the red wine of Eger and our favourite Hungarian fruit, plums. The caramelized chocolate-cinnamon crunchy layer, the spiced plum chocolate mousse and the cranberry-plum jelly with red wine create a harmonious flavors for the cake.

This year, László Gyuris from Szeged’s Virág Confectionary and Café won the Sugar-free cake of the Year competition with his creation called “Nagyi kedvence” (Grandma’s Favorite). 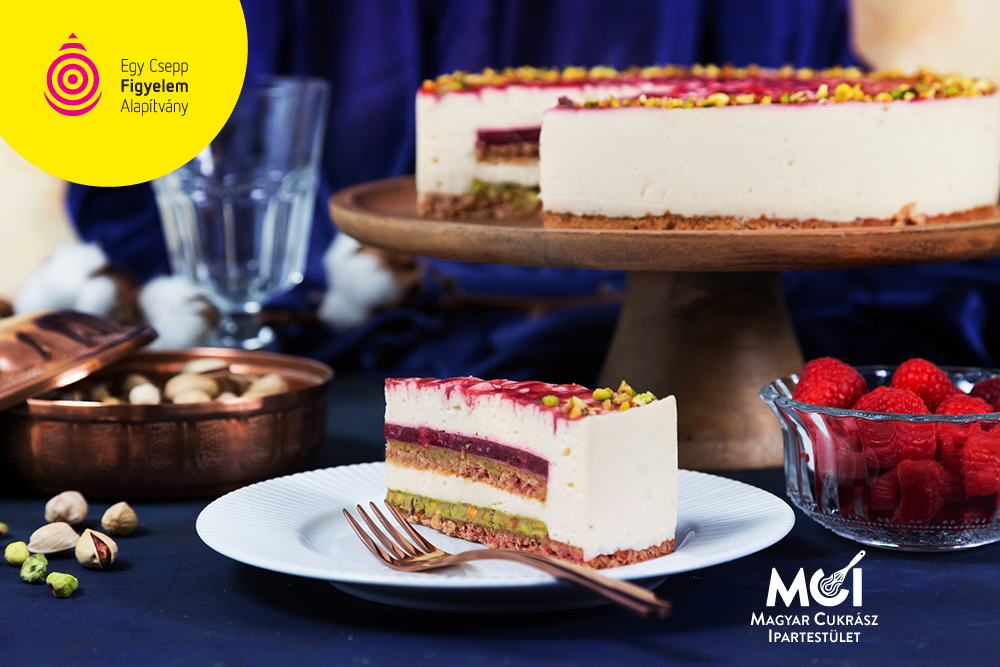 The cake has several delicious layers including raspberry, mascarpone mousse and white chocolate pistachio crunch. One slice contains 11,9 grams of carbohydrates and 233,8 calories only, therefore it is an excellent choice for people with diabetes, as well as for people trying to be conscious of the ingredients in their food.

The cakes will be available for tasting at hundreds of pastry shops all over the country from August 19.

Hungary’s greatest folk art event, will take place in the Buda Castle District of Budapest for the 36th time this year from August 19th through August 21th.

Every year, the Festival of Folk Arts workshops – where masters present special craft tricks and practices – draw a great deal of interest during the St Stephen’s Day celebration series.
Visitors are able to observe unique knowledge rooted in centuries of generational experience, immense humility and love. During the event, tradesmen move their workshops to the Buda Castle so that whoever would like to can try their hands at the many crafts.

These four days are indeed a celebration of masters and crafts, a borderless event that is the most significant meeting place for masters living in Hungary and abroad. The Festival is famous not only for its dance and music programmes, introductions of craftsmen, but for the folk market, where visitors can buy handcrafted products during the whole time of the event.

The gastronomic adventures start on 18th of August at Vörösmarty square.
In the Csárda Festival visitors can sample delicious food from the Carpathian Basin, watch folk dance shows, listen to lively folk music and experience the classical Hungarian traditions.

If you like to listen to music of all kinds and taste the best street food of the city, the Szabadság square will be the perfect place for you. 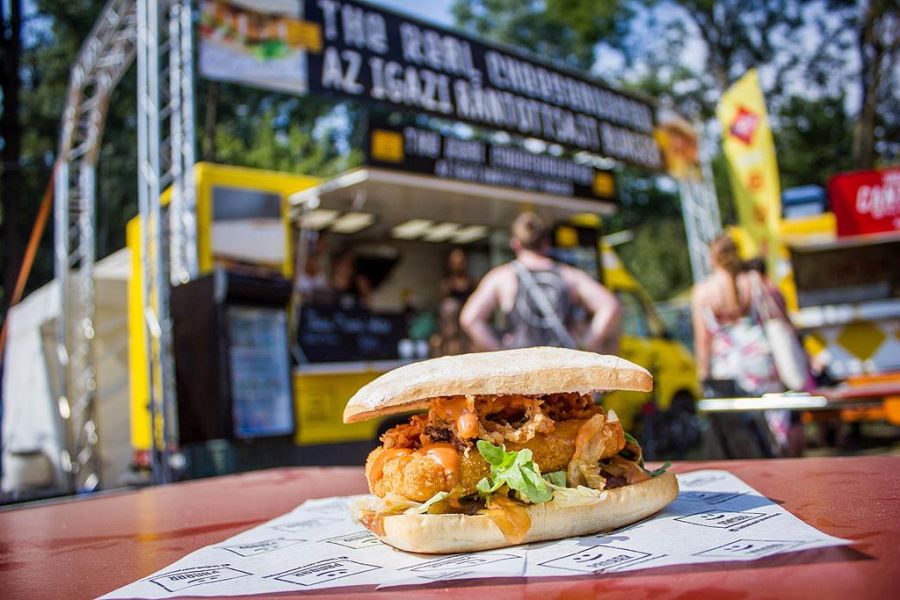 For 3 days you can visit the Promenade of Cities – a remarkable installation of hundreds of flags next to the Hungarian Parliament Building.
Learn more about the history and traditions of Hungary with each flag that tells us a little about the town they represent.

Where will I get a good view of the 20th August fireworks?We say Hilton!

That’s a very important question! The quays on the banks of the River Danube are always full of huge crowds, so it’s better to find a spot further away with an magnificent view of the river. For the perfect experience, you need to go to the Hilton Budapest. There are still rooms with panoramic views of the Danube available, so you’ll be in the perfect place to enjoy the time of your life during the holiday weekend, within easy reach of all the programmes in the Castle. Book a room for a fascinating overnight stay at elegant Hilton Budapest. 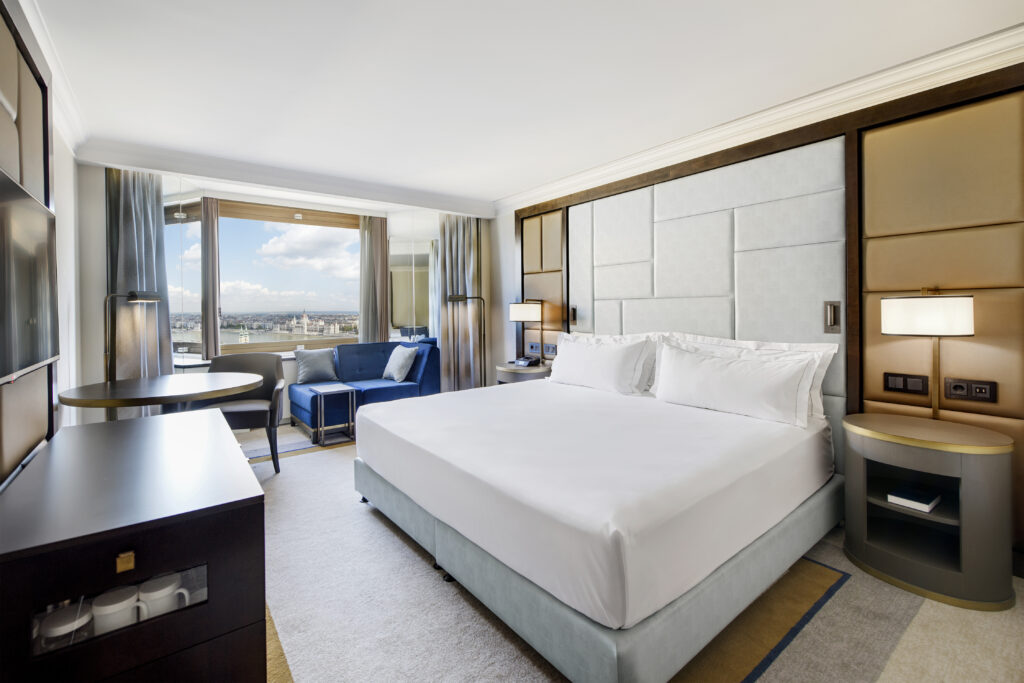 Experience the firework display next to the Fisherman’s Bastion!

Avoid the crowds in town, celebrate at Hilton Budapest on 20th August!

The LÁNG Bistro & Grill is located right next to the Fisherman’s Bastion right across from the Parliament Building. From there you can admire the amazing fireworks of the year from a truly exclusive location. Enjoy a festive dinner at LÁNG Bistro & Grill and watch the fireworks from the Hilton Budapest’s outdoor venue, the Babits Promenade!