The Gundel Ramps it Up with a New Star Chef

Legendary dishes from a legendary kitchen. Since its grand opening in 1894, the Gundel has been regarded not as a mere restaurant, but – thanks to founder Károly Gundel, János Gundel, and the renowned chefs that followed them – as the cradle of modern Hungarian dining culture, an establishment synonymous with the history of Hungarian gastronomy and restauranteering in general.  The secret of the Gundel Restaurants popularity lies with its sincere hospitality and venerable atmosphere, the centuries-old tradition that permeates its stately building, and a kitchen that, while using the very best of ingredients, remains steadfast in its dedication to innovation.

Starting April of 2018, the Gundel team will be welcoming to its ranks Zsolt Litauszki, member of the Bocuse d’Or Academy of Hungary and former creative chef of the Zsidai Group.

Fresh from a two-year stint in Costa Rica, Litauszki will be charged with developing a new approach for the restaurant, one that nevertheless respects the establishment’s time-tested, traditional values.  At the start of his career, chef Litauszki spent nine years in Austria, where he worked in eight different culinary establishments, including two that boasted Michelin stars.  Upon his return to Hungary in 2008, Litauszki quickly brought the Maligán Wine Tavern, then under his management, to rank among the best restaurants in the country.  Between 2009 and 2016, after opening the Zsidai Group’s second restaurant, the successful chef participated in the founding and operation of twelve other hospitality industry establishments (including the Pierrot, the ÉS Bistro at Kempinski Hotel, Baltazár Hotel and Restaurant, Pest Buda Hotel and Bistro, the Opera Café, the Spíler, and Jamie’s Italian Budapest), developing a special menu for each one.

As for the restaurant itself, as early as the time of the New York World’s Fair, the Gundel represented Hungarian gastronomy so extraordinarily that the New York Times claimed it had done more for Hungary’s reputation than might have been accomplished with an entire shipload of tourist brochures.  Just as Kodály and Bartók had done with the nation’s folk music, Gundel sought to collect recipes for gastronomic specialties from all parts of historic Hungary, often catering to his regular guests with dishes prepared specially for, and named after them.  Since then, the Gundel’s reputation has remained undiminished, winning a top ranking among voters for Budapest’s best restaurant again in 2017. 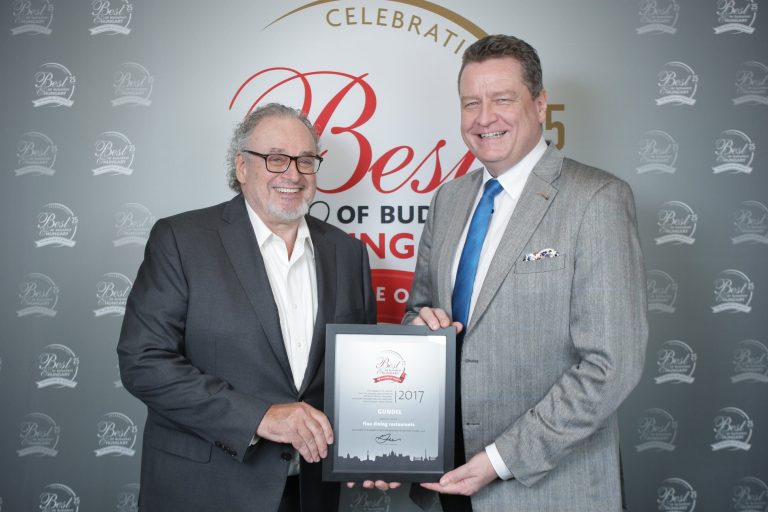 With the arrival of Zsolt Litauszki starting 16 April, the legendary Gundel will be offering diners an all-new menu, for which the kitchen staff has united selected classics from the Gundel legacy with various elements of contemporary cuisine to create an experience that represents the best of both the past, and present.  Perusing the new menu, one discovers – among other things – Károly Gundel’s famous gulyás, János Gundel’s fish soup, and goose liver delicacies prepared in that particular Gundel style.  Among dishes and accompaniments invented in the time of Károly Gundel himself are mushroom salad, Csíki sauce, Gundel-style tenderloin strips, and Pittsburgh veal ribs.  Still, the most illustrious of the restaurant’s creations remains to this day its special dessert, Crêpes Gundel, whose history is the stuff of legends, but whose invention is attributed not to the famous restauranteur whose name they bear, but to Lola Matzner, wife of writer Sándor Márai.  Though for many years the menu actually referred to the dish as Crêpes Márai, with the rise of communism and the subsequent banning of Márai’s works, the dish was necessarily rechristened.  Filled with rum-infused walnut paste and doused with dark chocolate sauce, Crêpes Gundel are wheeled out tableside, spectacularly flambéed, and served piping hot.

With the Gundel’s a’ la carte menu, visitors to the pleasant green expanses of Budapest’s City Park may also order from among dishes representing a somewhat lighter fare, while the restaurant’s 3-course Lunch, Sunday brunch, Liget Dinner, Sampler, and Gundel Grand Menus, too, serve to bring the still-influential legacy of the Gundel dynasty within reach of all.