The Atmosphere of Berlin, London, Munich, New York and Paris in the Heart of Budapest? – Danubius Hotels in Famous Films, Part II

The Astoria Hotel in downtown Pest first opened its doors in the spring of 1914. Before that, the site had been home to a busy inn and stagecoach stop for over a century. The building that replaced it was designed in French Empire style and named after the Waldorf-Astoria Hotel in Manhattan. Elegant both inside and out, the Astoria Budapest, with its cosmopolitan atmosphere, attracted numerous international stars and cinematic productions. 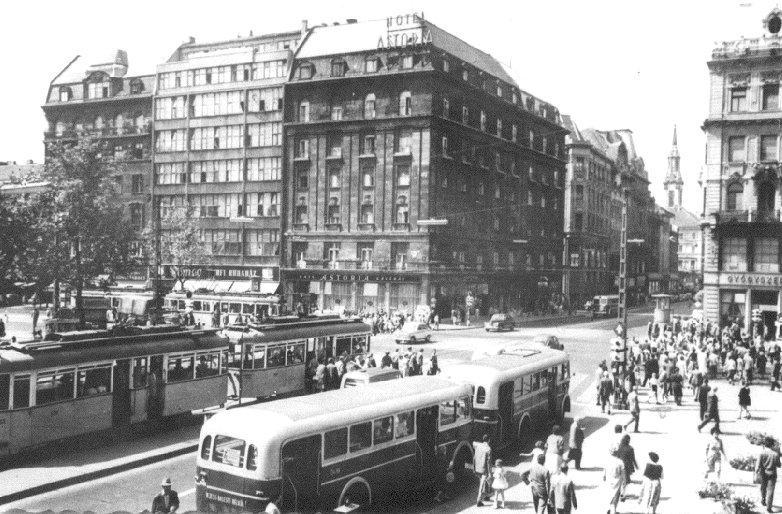 In films, the building has doubled for sites in Budapest, Berlin, London, Munich, New York, and Paris, a range of cities that testifies to the Astoria’s special atmosphere, now both a legend, and a concept among filmmakers. Follow us, then, on a fascinating, behind-the-scenes tour of domestic and international films history in this very special hotel.

The first major motion picture to feature the Astoria building was the comedy Állami Áruház (State Department Store). Shot in 1952, the film commenced with a scene staged in front of the hotel, including opening sequences with actor Kálmán Latabár, the Hotel building, and Budapest tram and pedestrian traffic that offer an intriguing glimpse of the city at that time in history.

In the 1970s, filmmakers began using the hotel with increasing frequency. During this period, the opulent and venerable building was the setting for numerous legendary films and became an important destination for metropolitan film tourism.

In 1973, for example, the main entrance and Empire-style restaurant crop up in Pál Sándor’s Football of the Good Old Days, whose writers dedicated an entire burlesque-style scene to protagonist Dezső Garas’s getting stuck in the building’s revolving door. This door has since been removed in one of a continuous series of renovation projects.

The next production in our tour is István Szabó’s classic film, Mephisto, for which footage was shot in the Astoria in 1980. Szabó’s work, which won him an Oscar for Best Foreign Film, includes a scene featuring the hotel as a Berlin venue, with Klaus Maria Brandauer in the role of the film’s protagonist.

Cinephiles will already have become accustomed to seeing certain locations pop up repeatedly in Szabó’s films, and so it is with The Prophet shot in 1988, in which the director not only returns to the Astoria’s restaurant, but, interestingly, forays even further into the realm of déjà vu. The setting is again the Berlin of the 1930s, with Klaus Maria Brandauer again sitting at one of the restaurant’s tables: indeed, even one of his companions in the scene is portrayed by the same actor, Péter Andorai, who had worked with Brandauer before in Mephisto.

A few years later, the hotel was to become the setting for yet another film, this time a made-for-television piece by HBO. In The Josephine Baker Story, director Brian Gibson, with the utmost casualness, portrays the Astoria’s restaurant and reception – and even, for a fleeting moment, the hotel kitchen – as a venue in New York City. In the story, Josephine, played by leading actress Lynn Whitfield, is seated at Martyns Restaurant (in reality the Astoria lobby) with her mentor, played by Rubén Blades. Though Gibson and Whitfield were husband and wife at the time of their stay in Budapest, their brief, two-year marriage ended in divorce shortly after the film’s premier. Louis Gossett Jr. fared considerably better, winning a Golden Globe for his role in the production.

In 1992, Sir Michael Gambon in the role of Inspector Maigret filmed a total of twelve episodes of the second season of the crime drama, shot largely in Hungary, specifically in Budapest. Known primarily for his work in theatre, the fifty-two-year-old actor had not yet had a cinematic breakthrough. The series, marked by the presence of the now-world-famous British actor, was photographed by Elemér Ragályi. The Astoria, for its part, appeared as a Paris hotel in the episode entitled Maigret on the Defensive. The series’ creators actually rechristened the hotel for the purpose, so that it appeared to viewers as the “Hundred Keys Hotel”. 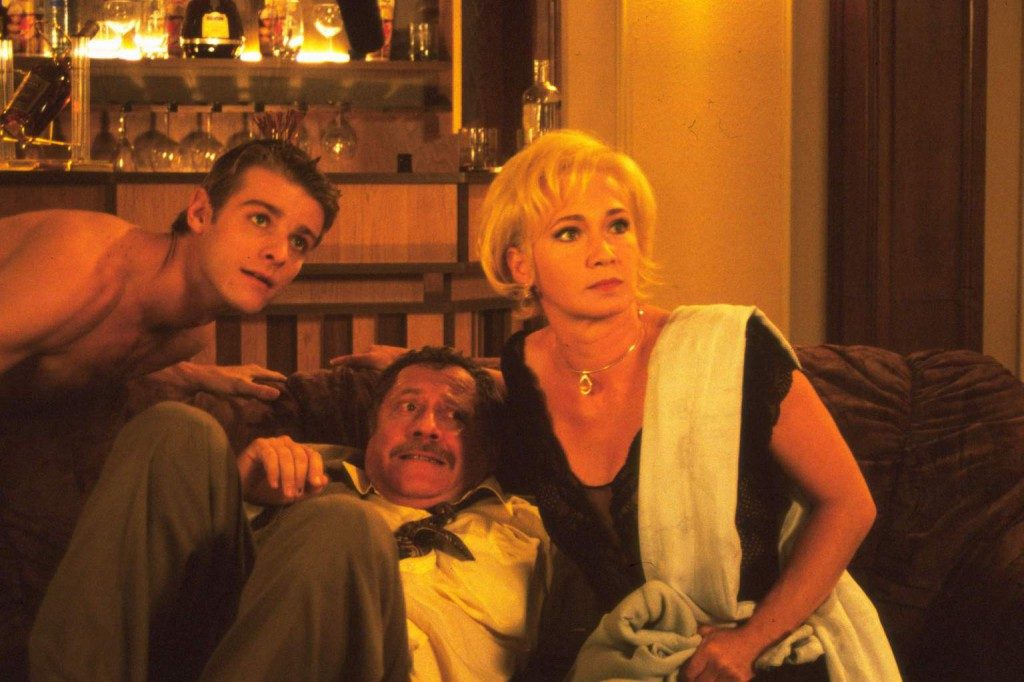 The next memorable film to be shot in the Astoria was the work of producer Andy Vajna, whose comedy Out of Order premiered in 1997 and featured the Astoria as the main venue of the film. A successful film from the outset, Out of Order garnered larger audiences than any other Hungarian film in recent decades, crediting Vajna, his colourful cast of actors, protagonist András Kern, and their film crew with having produced a true classic.

In 2001, international celebrities again turned up in the hotel restaurant for the filming of the cinematic drama Max, starring John Cusack and Noah Taylor. The story for the film, directed by well-known Dutch screenwriter Menno Meyjes, takes place in 1920s Munich. The hotel restaurant appears in the film’s parallel-edited closing scene. Meyjes had previously written screenplays for such legendarily successful adventure films as Steven Spielberg’s 1989 Indiana Jones and the Last Crusade.

In 2002, the main facade, stairwell, and one room of the hotel were featured in the opening scene of the two-part wartime television drama Perlasca: the Courage of a Just Man, starring Luca Zingaretti. In the film, Eszter Ónodi plays a chambermaid who helps Perlasca make his escape. The choice of location was no coincidence: during the Nazi era, the reluctant diplomat and heroic saviour had, in fact, kept an office on the Astoria’s sixth floor at a time when the Gestapo occupied the greater part of the building. 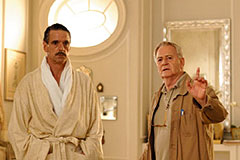 The crew of the motion picture Being Julia, directed by none other than István Szabó, also utilised the Astoria. Here, the hotel doubled as an establishment in London, while the line-up of stars included Annette Bening, Sir Michael Gambon returning to Budapest, and Jeremy Irons – who all but lived in the city at the time – in its three leading roles. Bening in particular was to win a Golden Globe for her portrayal in the film. Irons, who was a great admirer of Budapest, was a repeat guest of the hotel during this period.

Featuring next in the Astoria’s impressive cinematographic history are two more Hungarian films. The first, a big-screen version of Zsigmond Móricz’s classic novel Relatives, premiered in 2006 and represented the return to the hotel by István Szabó.  The second, the 2010 film Kolorádó Kid, was set during the Hungarian revolution of 1956 and featured the Astoria lobby as the Viennese meeting place for Hungarian dissidents. 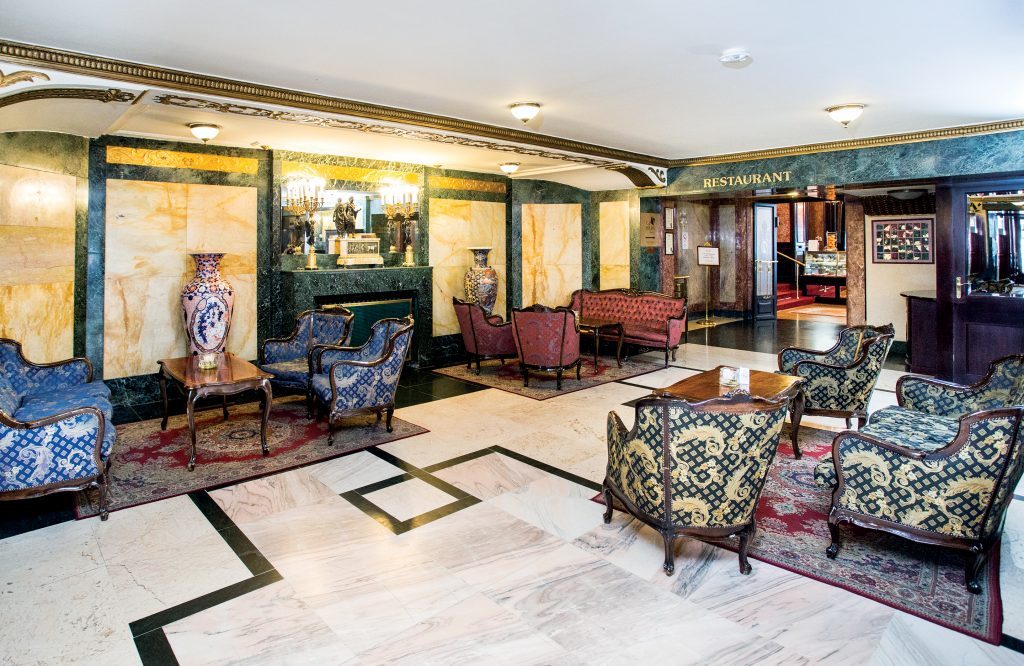 In recent years, the array of international stars to distinguish the hotel with their presence has continued unabated. In an example occurring in 2013, a British crew arrived in Budapest to film a mini-series on the life of world-famous writer Ian Fleming. Though Fleming was known primarily as a novelist, his own life is said to have been nearly as adventurous as those of his characters. The first James Bond story, released to the world as the novel Casino Royal, was written on Fleming’s honeymoon. The scene in which the Astoria is portrayed as an upper class London restaurant shows off the hotel’s striking interior as early as the series’ first episode. Playing the lead in the series was none other than Dominic Cooper, star of the Mamma Mia films.

In 2016, the same decorative venue was to welcome yet another global star, Rowan Atkinson, who dined at the Astoria restaurant for the British TV film Maigret’s Night at the Crossroads. This time, the location doubled as an elegant restaurant in Paris. 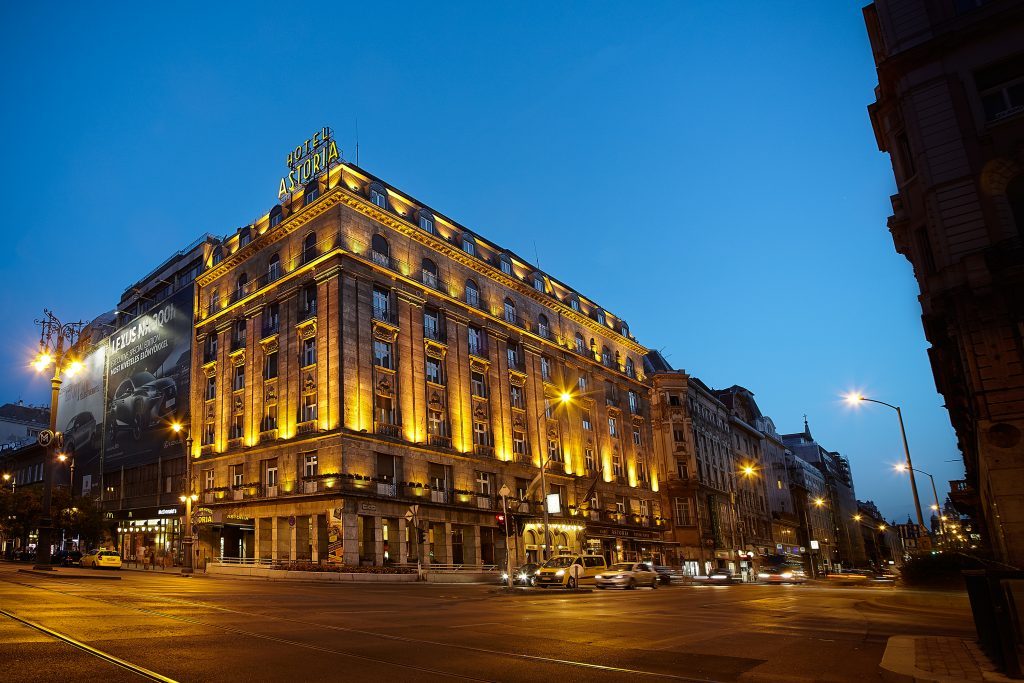 Stars Who Stayed at the Astoria

Though we have already seen that British film star Jeremy Irons has roomed at the hotel on several occasions, he is far from the only one. Other guests have included Susannah York, Wim Wenders, Jiri Menzel, Peter Greenaway, Larry Hagman, and Franco Nero. The Hungarian Feature Film Festival, too, has frequently lodged international guests there when holding events and film screenings at various downtown cinemas. Indeed, it is a feature of the hotel’s film tourism appeal that two of Budapest’s most popular motion picture theatres, the Puskin and the Uránia, are located in the immediate vicinity. If you, like the stars, would like to stay at the Hotel Astoria, click here: Danubius Hotel Astoria

Romantic Tip:  Out of Order Room

If you would like to stay in the room where the popular comedy’s underclothes scenes were shot, ask for room 411. The full experience includes dinner in the Astoria restaurant, perhaps at a table formerly occupied by some world-famous screen personality. The cast party following the premier of the Hungarian spoof was also held here.

One of Budapest’s Most Elegant Restaurant Interiors

The Astoria restaurant has earned a special place for itself in the Hungarian film tourism industry. To survey the productions of the past few decades with the eye of a cinephile is to see that the venue boasts one of the most clearly Western style interiors and classical atmospheres of any dining spot in the city. Indeed, it is a setting equally accommodating to American, British, French, and German tastes. Yet there is another aspect of the interior that adds to its appeal as a cinematic location; specifically, that it is flanked on one side by a raised gallery with extra tables and on the other by a stairway leading to a second hall, interior heights that offer filmmakers an easy and excellent way to display the entire room in its full splendour for the benefit of viewers.

One final point of interest involving the restaurant: for decades, the Hungarian National Radio used the gallery, where cameras have frequently been positioned, for its live broadcasts of the classical music quiz show, Who’s Today’s Winner? Fun and Music in Ten Minutes.

If you, too, would like to partake of the restaurant’s unique atmosphere and enjoy the Astoria’s “traditional with a 21st-century twist” cuisine, click here: Café Astoria Restaurant.

If you are curious to find out what Madonna, Eddie Murphy, and Jennifer Lawrence have in common, read Part 1 of our Danubius hotels in famous films series on the Hotel Gellért.