The Legend of Margaret

You’re certain to have heard already that beautiful Margaret Island is named for Saint Margaret, a Hungarian Princess of the Árpád Dynasty, whose brief life – filled with religious service and divine miracles – was spent in the cloister there.  Margaret’s very special life story is told as The Legend of Margaret, a work written posthumously in the 13th and 14th centuries. To know Margaret Island, one must also know the legend, since traces of the centuries-old events are still found throughout the park today.

Who was Margaret and how did she come to live on the Isle of Rabbits?

Margaret was born in 1242 in the Dalmatian castle of Klis, where the royal family, fleeing from the Tatar armies, had taken refuge.  Her father, King Béla IV, who had close ties to the Dominican order (or “Dömések,” as the medieval Hungarians called them), had sworn an oath that if Hungary were to be saved from the continued ravages of the Tatars, he would offer up his yet-unborn daughter to the church.  Thus, Margaret was handed over to the Dominican nuns in Veszprém at a very young age.  In order to be closer to the tiny princess, Béla had a cloister built on the Isle of Rabbits, a place whose pleasant-sounding name was actually the result of a “misreading” (perhaps an intentional one).  In fact, during the early Middle Ages, the island had been dubbed Isola Leprorum, or Isle of Lepers, as the place where people with that disease were segregated from the rest of society.  In later parlance, a letter was dropped, and the name became Isola Leporum, or Isle of Rabbits.

The young Margit and 17 of her companions were moved to the new convent on the Isle of Rabbits in 1252.  King Béla IV and his wife often visited their daughter, whose entire life was characterised by an abiding sense of commitment.  She expressly asked that she be treated as a “natural person” and was unwilling to accept any favouritism on the part of others of her order. 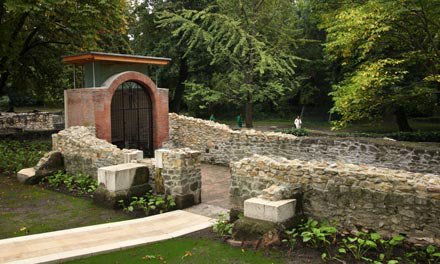 The news spread to nearby countries and even more distant places that King Béla had a fabulously beautiful daughter, and one after the other, suitors began to arrive in Hungary to ask for her hand in marriage.  The eligible men included the Czech King and many others, but Margaret so despised all worldly conceits and delights, that she refused to entertain the idea, even if her father, driven by political considerations, had several reasons for wanting her to wed the heir of another royal house.  Margaret resisted each solicitation with an iron will, remaining steadfast in her oath – even when her enraged father, in return for her resistance, withdrew all support from the cloister.

During her lifetime, the bitter-fated princess, who walked about in rags and cheerfully carried out even the filthiest of work, was regularly visited by the sick and dying, whom she consistently helped, prompting contemporary reports of miraculous abilities.

The convent became a place of devotion and pilgrimage, a hub and custodian of the faith of the nation.  Margaret, who was made the Hungarian capital’s patron saint, died there in 1270 at the age of twenty-eight.  Located in the cloister’s own church, her grave became a much-visited pilgrimage site.  The nuns at the cloister continued to respect and preserve her memory and to follow her example for another two and a half centuries, until they were forced to flee the island in the wake of the destruction wreaked by the invading Ottoman forces.  The nuns left the island for good in 1540, taking with them the earthly remains of Margaret the Blessed, which were lamentably lost some time later when the Dominican order was abolished.

Margaret was canonised by Pope Pius XII on 13 July 1943.  Three decades earlier, in 1914, a storm on Margaret Island had uprooted a tree, revealing the cloister’s still-intact bell.  Excavations were begun, though to this day, the full extent of the cloister ruins remain to be unearthed.  The sections currently visible include the western court, chapel, queen’s residence, tower, sacristy, church, ambulatory, chapter hall, kitchen, furnace room, dining hall, well-house, laymen’s dining room, and study.  The Dominican cloister gardens – which boasted piped-in water as early as 1251 – double as the first Hungarian monument to the horticultural arts. 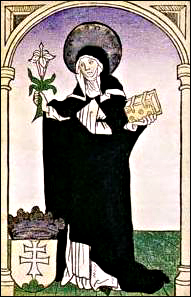 The Legend of Saint Margaret

The Legend of Saint Margaret is a priceless work written in the Hungarian language:  a codex relating the story of Margaret (1242-1270), daughter of Árpád Dynasty King Béla IV, her life in a convent of the Dominican order, the miracles she performed, and various testimonies to her deeds.

The codex was written at an unknown time by an unknown author based on two sources in Latin.  The first is believed to have been written by Marcellus, head of the Hungarian Dominican order and Margaret’s confessor and spiritual guide, shortly after her death.  The other is a written record of various eye-witness accounts of Margaret’s life given in the year 1276.  Most researchers agree that the legend was probably originally written in Latin at the end of the 13th century, with the Hungarian translation providing the basis for the late-14th-century text – a product of multiple rewritings and stylistic redactions – known today.

The text of the Legend of Margaret is preserved by a codex copied – and presumably also edited – by Sister Lea Ráskay in 1510 at the Margaret Island Dominican Convent (where Margaret herself had lived centuries earlier).  In 1529, the codex, and with it the legend, found its way to the Clarisses of Nagyvárad when the nuns of Margaret Island fled there from the Ottoman forces.  From Nagyvárad, it then travelled to Nagyszombat and Pozsony, until it finally found a home with the National Széchényi Library, where it resides today.

Pictures and sculptures of Margaret portray the saintly princess in a white Dominican robe and black mantle, with a lily in her hand and a crown on her head.  Devotion to Margaret is widespread not only in Hungary, but also abroad.  Fourteenth-century frescoes of her can be seen in both Assisi and Florence, while a third fresco in Treviso bears the inscription “Beata Margareta Regina Ungariae Ordinis Fratrum Predicatorum”.  A carved wooden likeness of Margaret also adorns the pulpit of the church in Ragusa.  Additional images of the fragile princess feature among those of other saints in the Dominican churches in Perugia and Bern, on the altarpiece of the cloister in Weesen, and on a column of the Basilica di Santa Maria sopra Minerva in Rome.